Australia’s Bureau of Meteorology’s interactive weather forecasting chart has added new colours to extend its previous temperature range that had previously been capped at 50 degrees Celsius. The palette now includes deep purple and pink, which extend the range to 54°C – about 130° Fahrenheit. They have had to extend the colour range to accommodate the hotter temperatures that we are experiencing, beyond the previous all-time maximum temperature of 50.7°C reached on January 2, 1960 at Oodnadatta Airport in South Australia

And last Monday we set a new national average maximum of 40.33 °C. While it was hot, we must remember that it has been hot before. The previous record was from 1972, just 0.16°C cooler. We have, for a long time, been a land of heatwaves and extremes. Now, this trend is getting stronger.

I’m grateful to hear the our prime minister has her head around the idea: “Whilst you would not put any one event down to climate change, weather doesn’t work like that, we do know over time that as a result of climate change we are going to see more extreme weather events and conditions.”

And we are. We have never measured such a long, widespread, and severe heat wave in Australia as we have in the last week. The bushfires that are blazing around the country (and the lives affected) and the changes we are observing in rainfalls, stream flows — even flowering times — are a reminder that the global changes that surround us change the way we have to think and act, both in what we are doing to mitigate climate change, and in how we adapt ourselves and the ecosystems with which we share our land to the changes that are already under way.  For we are not the same, and nature is dynamic.

Click here for a neat report from the Climate Commission which present some further details. 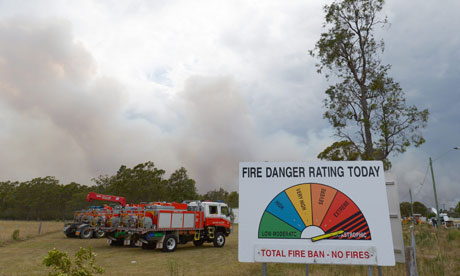 A fire danger rating sign near a blaze in south-eastern Australia. Many parts have been given a ‘catastrophic fire danger’ rating, meaning that if fires break out they will be uncontrollable and fast-moving, so residents should evacuate. Photo from http://www.guardian.co.uk/

This entry was posted in blog and tagged bureau of meteorology, climate, extreme weather events, science. Bookmark the permalink.